Tescan is a 30-year-old company. Tescan has primarily developed systems in the SEM and FIB-SEM arena. The MicroCT addition to the TESCAN lineup comes from Belgium, with the 2018 acquisition of XRE, a company that was spun out of the University of Ghent Center for XRay Tomography (UGCHT).

The TESCAN MicroCT lineup is focused on flexibility and various sample sizes, along with Dynamic CT, which is enabled through very fast scans. This allows experimental imaging in situ, where experiments can run continuously while images are collected in close to real-time. 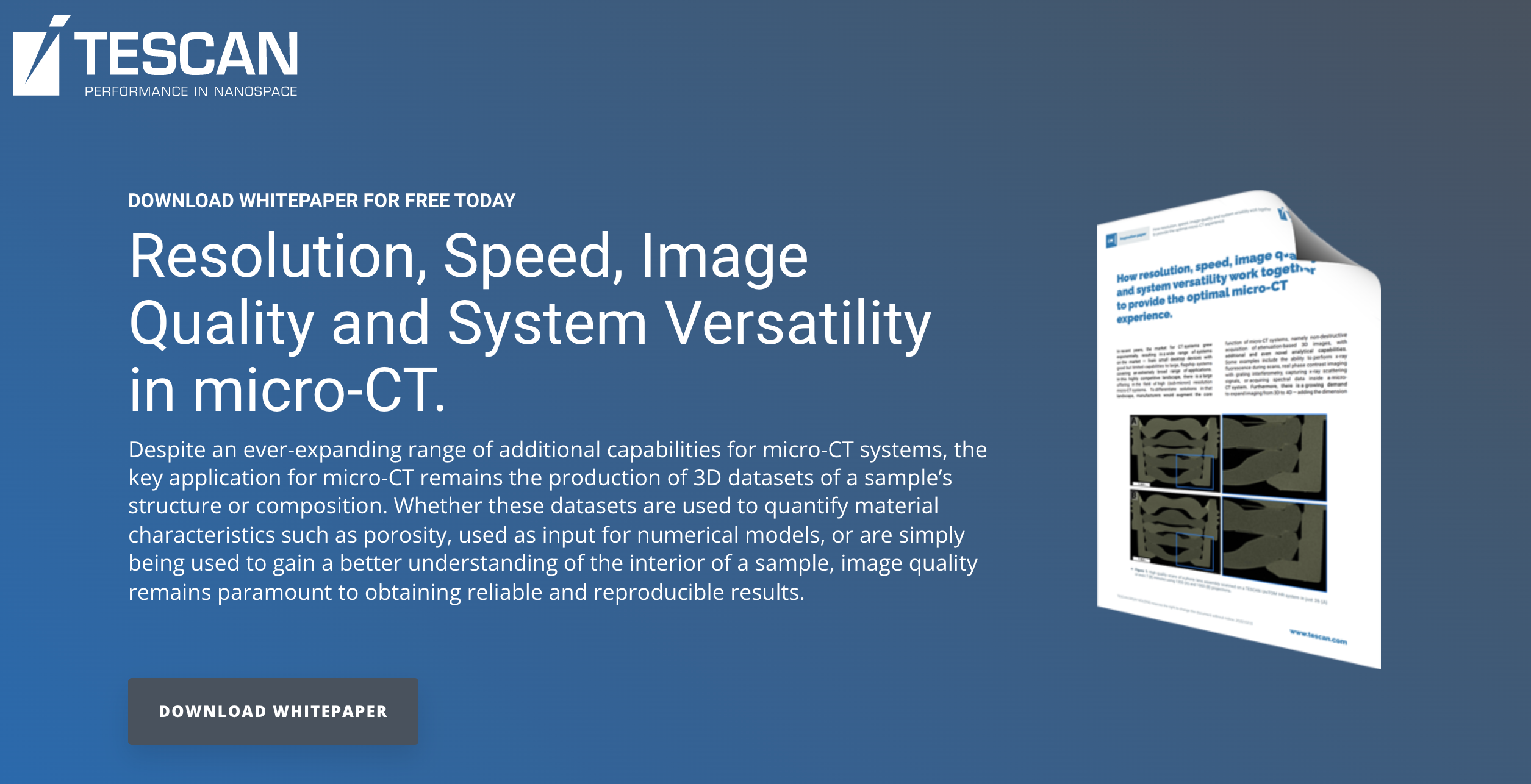 DynaTOM: A gantry-based system where the source and detector rotate around the sample, which is unique in non-medical CT imaging.

XRays are a unique form of electromagnetic radiation for use in imaging because of their ability to penetrate matter while having a strong interaction, allowing the imaging of internal components. Xrays were first developed by German physicist Wilhelm Röntgen (1845-1923), who discovered the emission when working with a Crookes-Hittorf Tube. He called them “X” rays because of their unknown nature, though many refer to this spectrum of emissions as Röntgen Rays. Just 5 years later in 1900, XRays were being widely used in medicine for internal imaging.

Today Xrays are widely used in medicine, in materials science, for physical security, in food safety applications, as well as in many other applications. In the 1960s, a researcher at EMI named Godfrey Hounsfield developed the first computer-aided XRay. EMI was mainly in the music business, and their success with The Beatles allowed them to fund the independent research of Hounsfield that lead to the first CT. He went on to be awarded the Nobel Prize in Medicine in 1979.

A series of 2D radiographs are collected in the acquisition phase, and these images are projected to create a 3D reconstructed visualization.

In the early 1980s, the first microCT system was developed to allow pixel sizes around 50 microns. Today, submicron resolutions are supported by commercial systems.

The intensity of the received signal in each 2D pixel is a function of both the chemical composition of the material as well as the length of the XRay path through the material.

For samples with multiple materials the absorption or intensity of the received signal can be represented as the algebraic sum through the various materials. 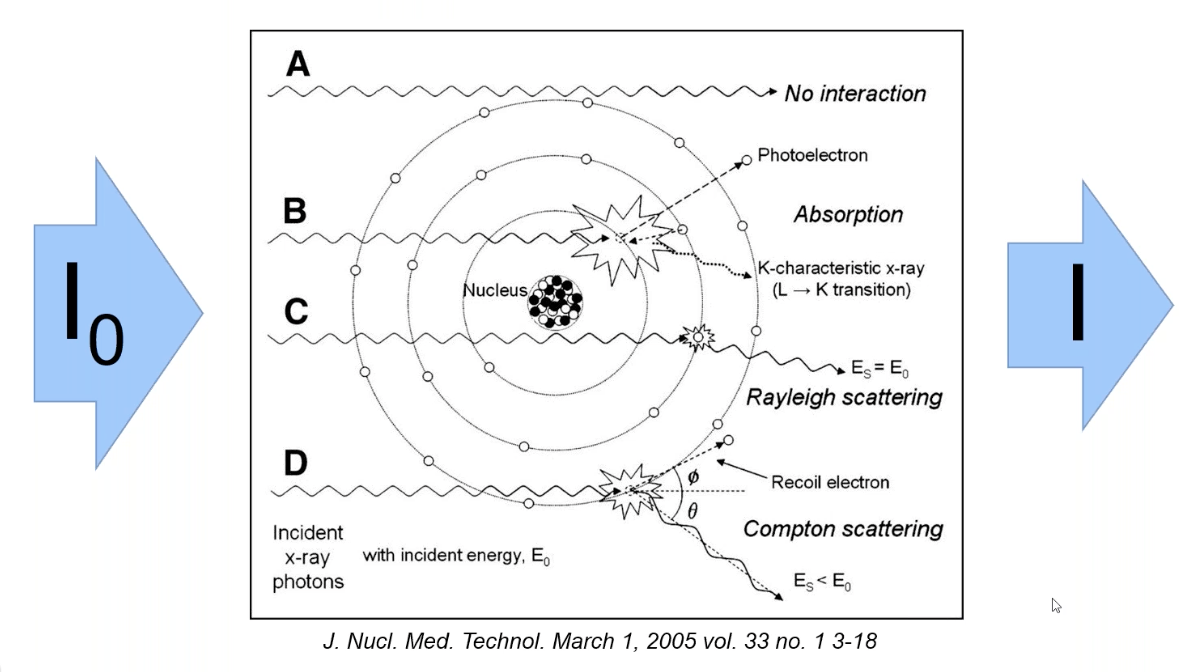 The attenuation of the signal depends on the atomic composition. As the atomic weight of the sample increases, the signal required to penetrate an equivalent path length goes up by around the power of 3. 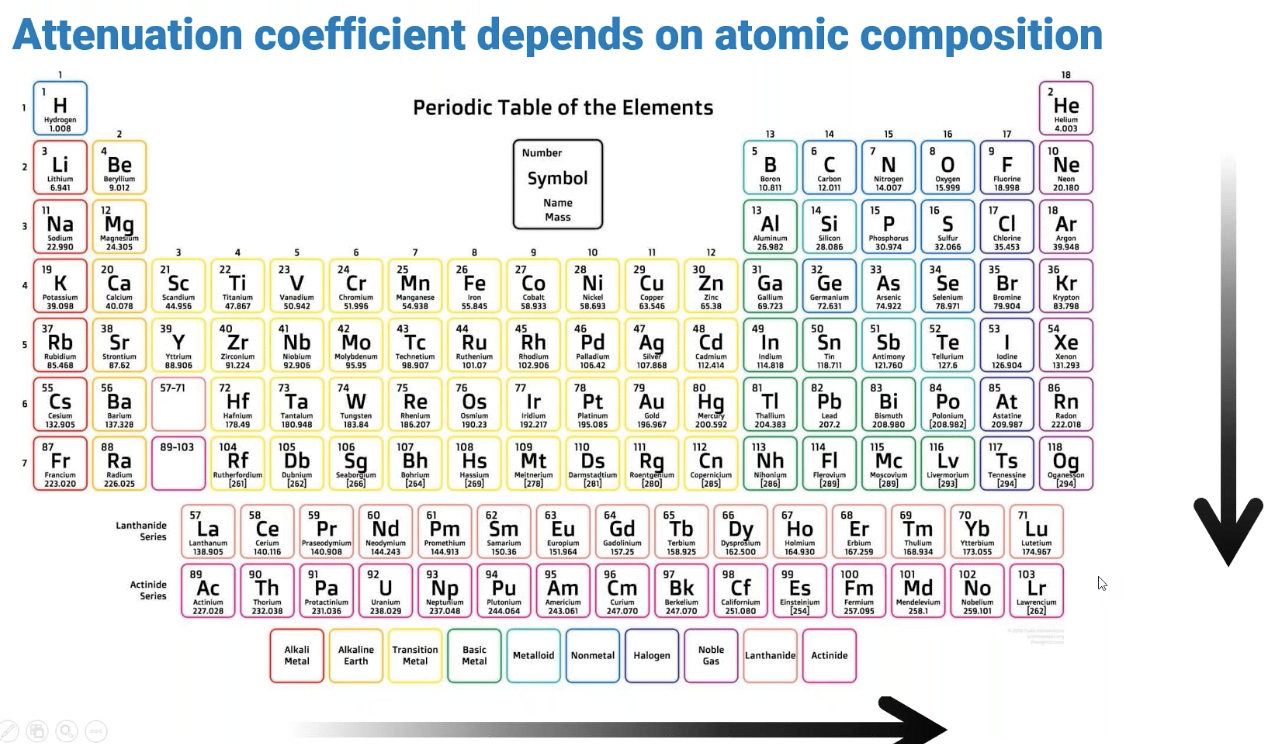 The resolution of the system is a combination of the XRay spot size (s), detector resolution (d - size and pixels), and the geometric magnification (M) which is the function of the relative position of the sample between the detector and the source. 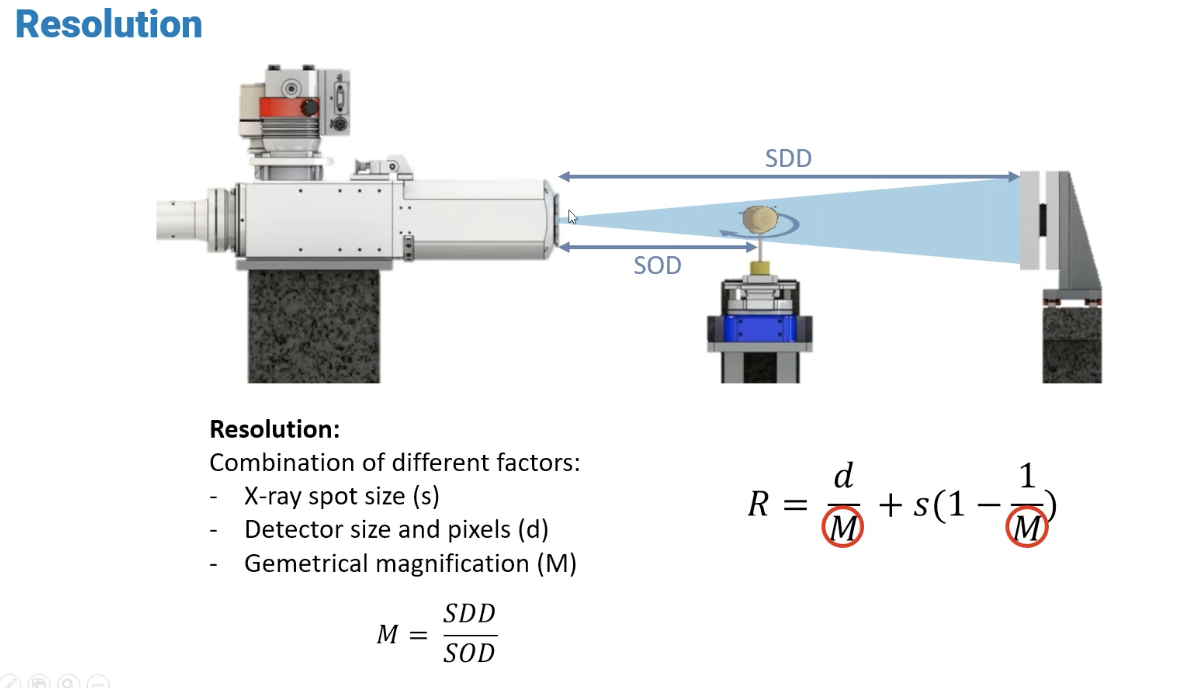 After 2D images are collected, slices of the sample can be reconstructed by running hundreds to thousands of projections through a Radon transform and uses a filtered back-projection to create a series of sliced images in a stack. 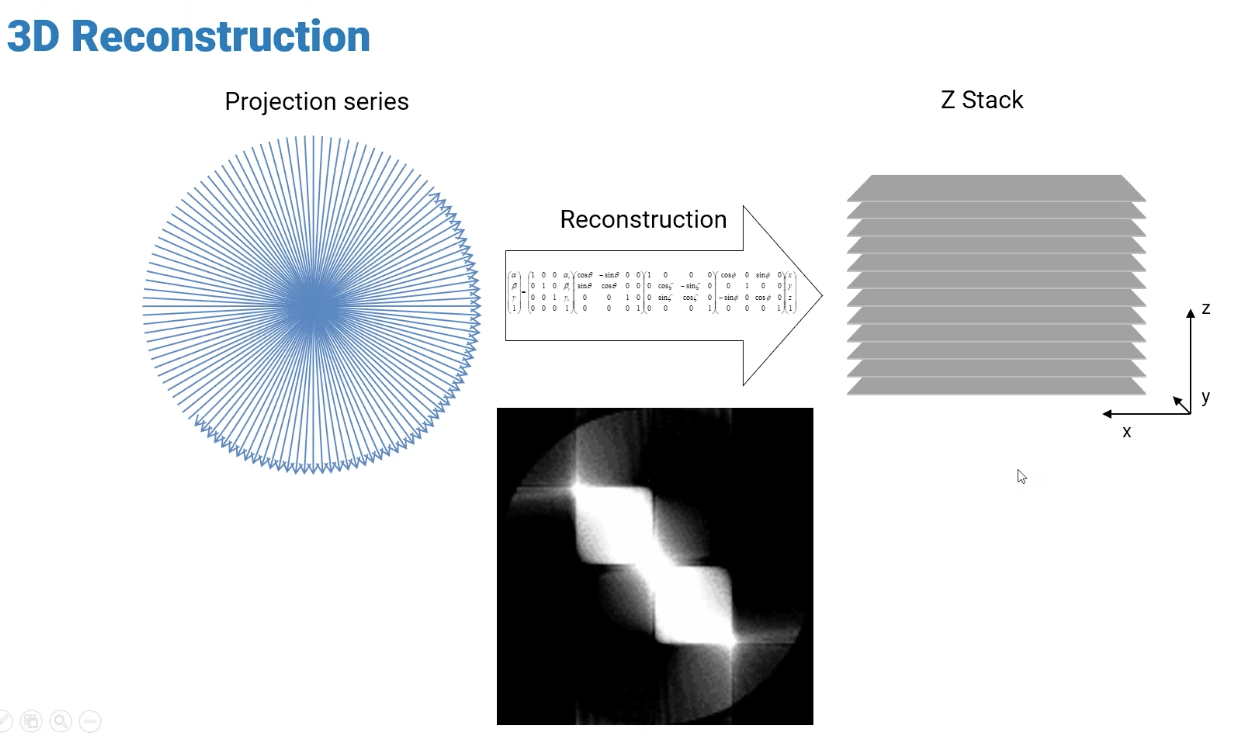 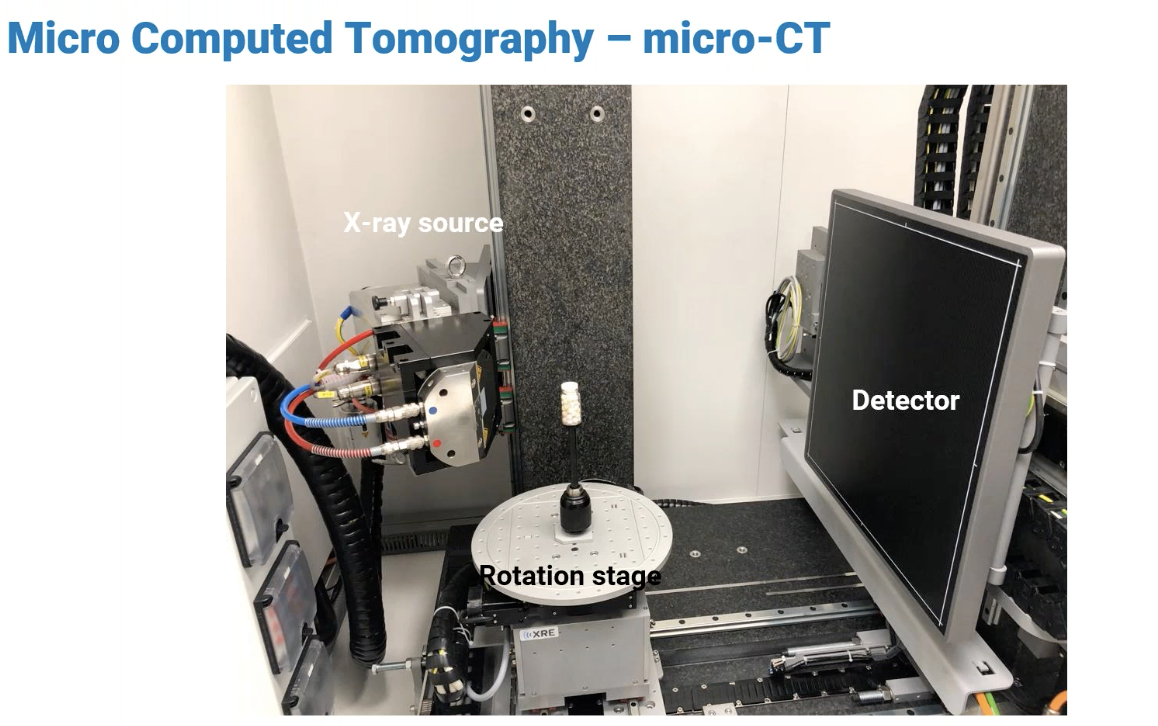 The three main components of the MicroCT system are the XRay Source, Detector, and Rotation Stage.

There are 2 main types of XRay sources used in MicroCT.

Reflection XRay Source: A higher power source for penetrating dense samples. These systems have a larger spot size, resulting in a lower resolution. The reflection spot is often fairly far from the window, which affects the maximum magnification. 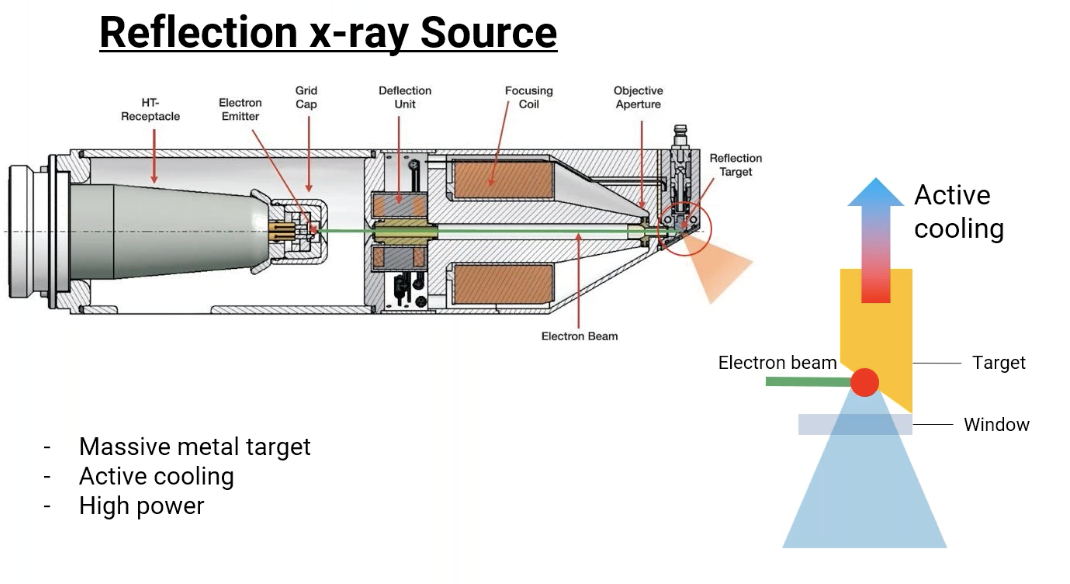 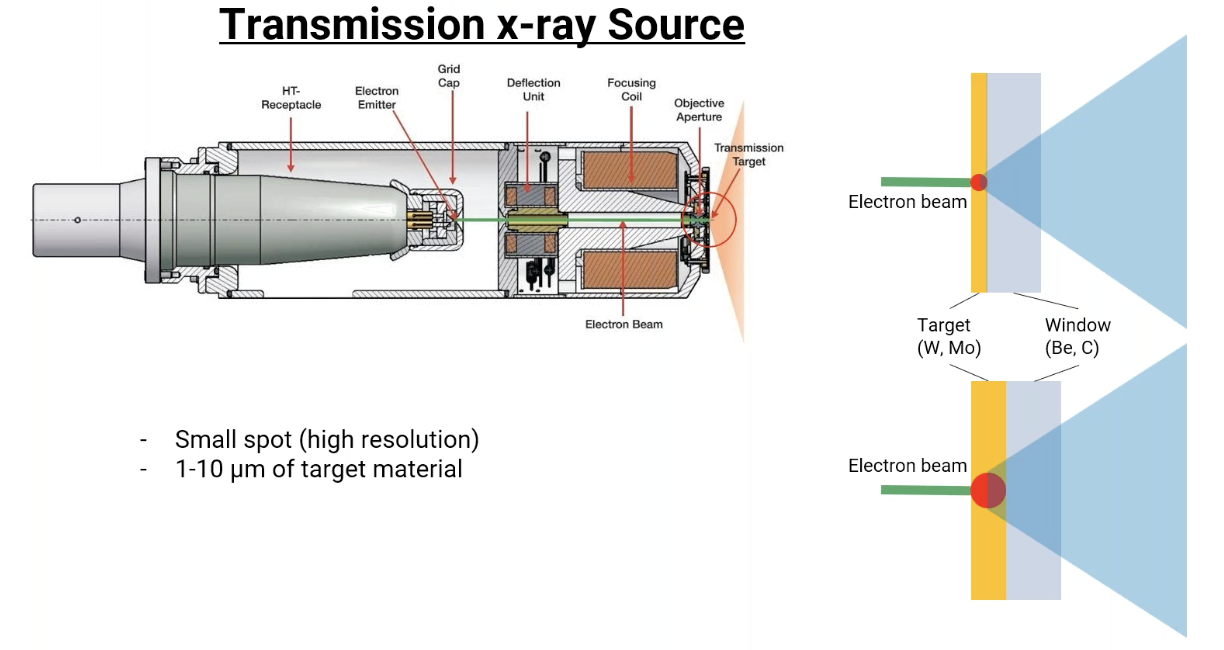 Generally, the higher the resolution of the spot, the lower power of the system, and thus the sample size being scanned must be much lower, especially for dense samples. Longer scan times must be used to generate images at higher resolution.

The effect of spot size on resolution is shown in this diagram. For a larger spot, since the photons can be sourced from a larger area, they cause blue on the detector. The detector resolution in both these images is the same. This is why understanding the spot size is as important as the voxel dimensions of the detector. Both factors define the overall system resolution. 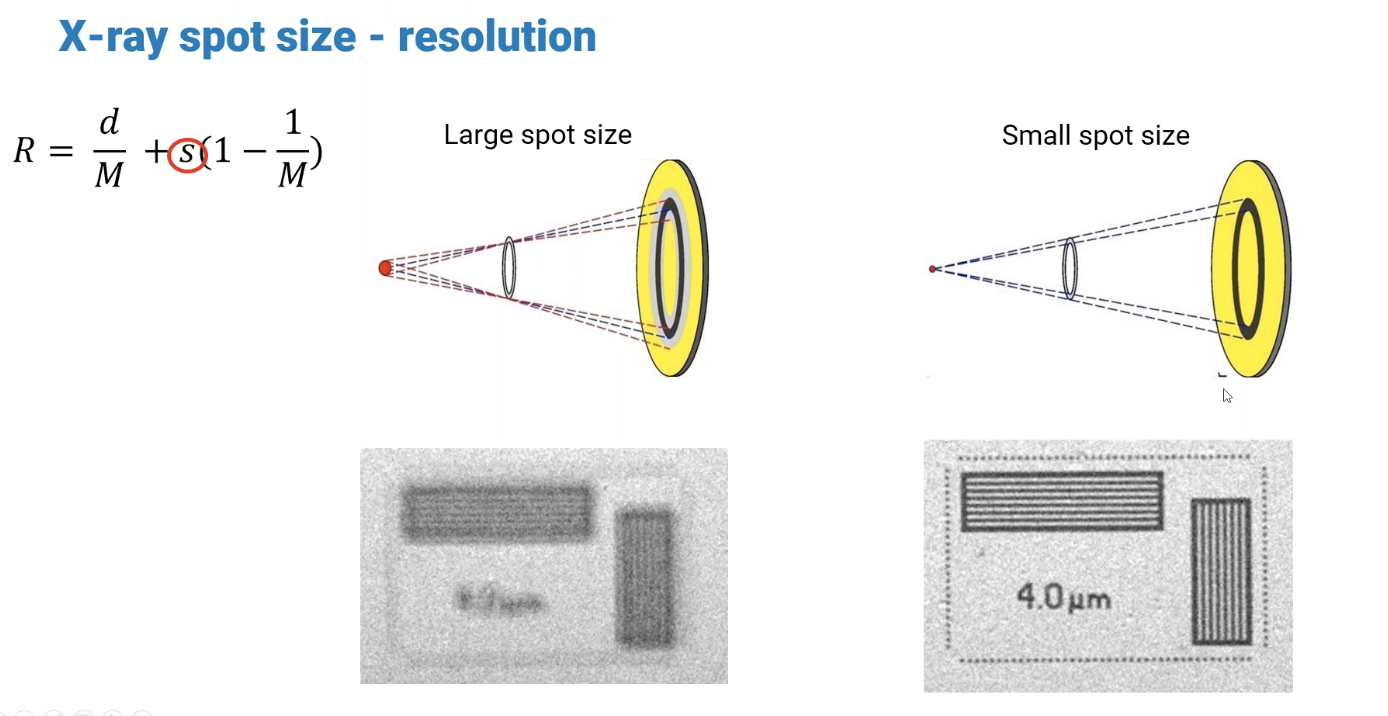 The detector itself uses a scintillating material to convert photons into visible light, which impinge on a photodiode. The resulting electron flow from the diode matrix is measured. 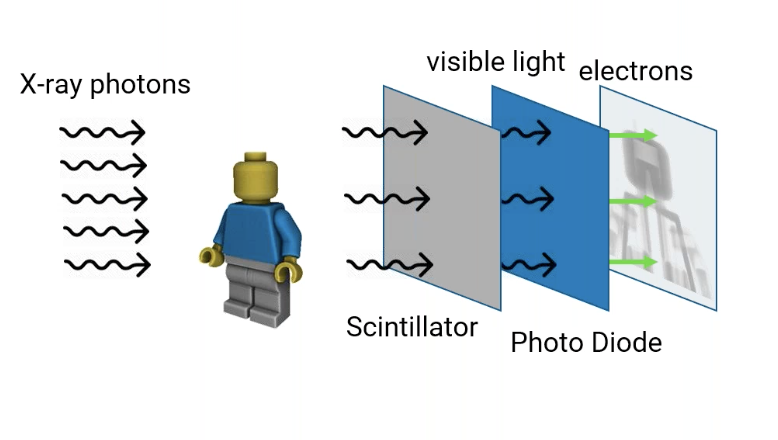 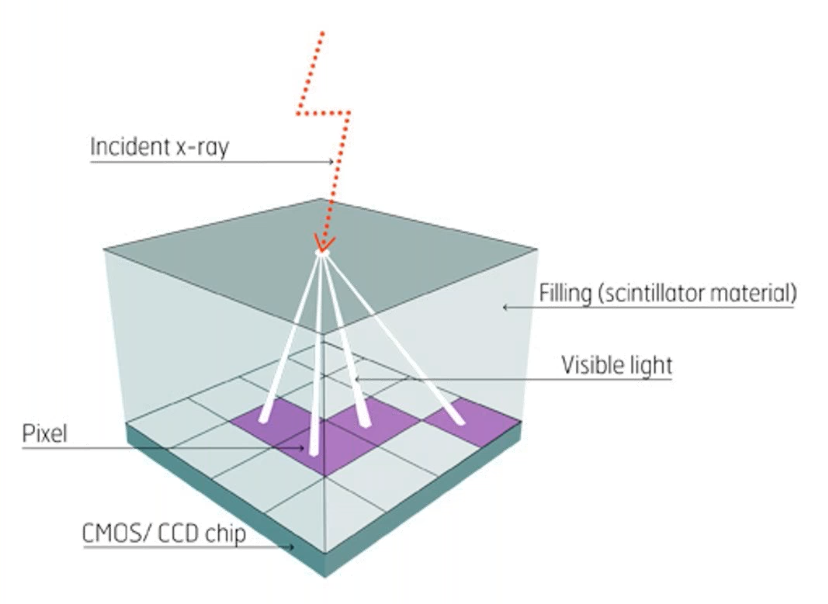 As shown above, incident XRays can cause activation of adjacent pixels in the detector causing blurring in the image. Thin scintillators allow for sharp images and can detect very low energies, but can have higher relative noise levels. 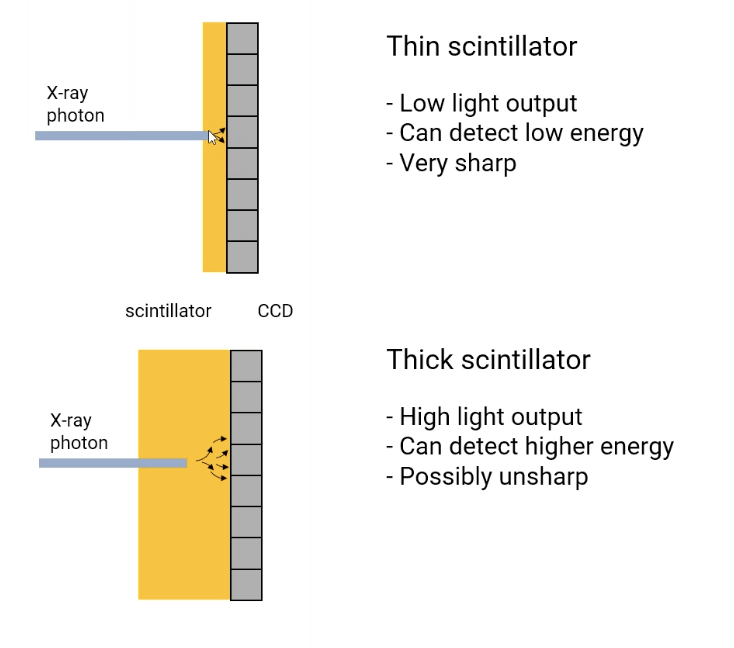 Do you have questions or are you interested in more information? 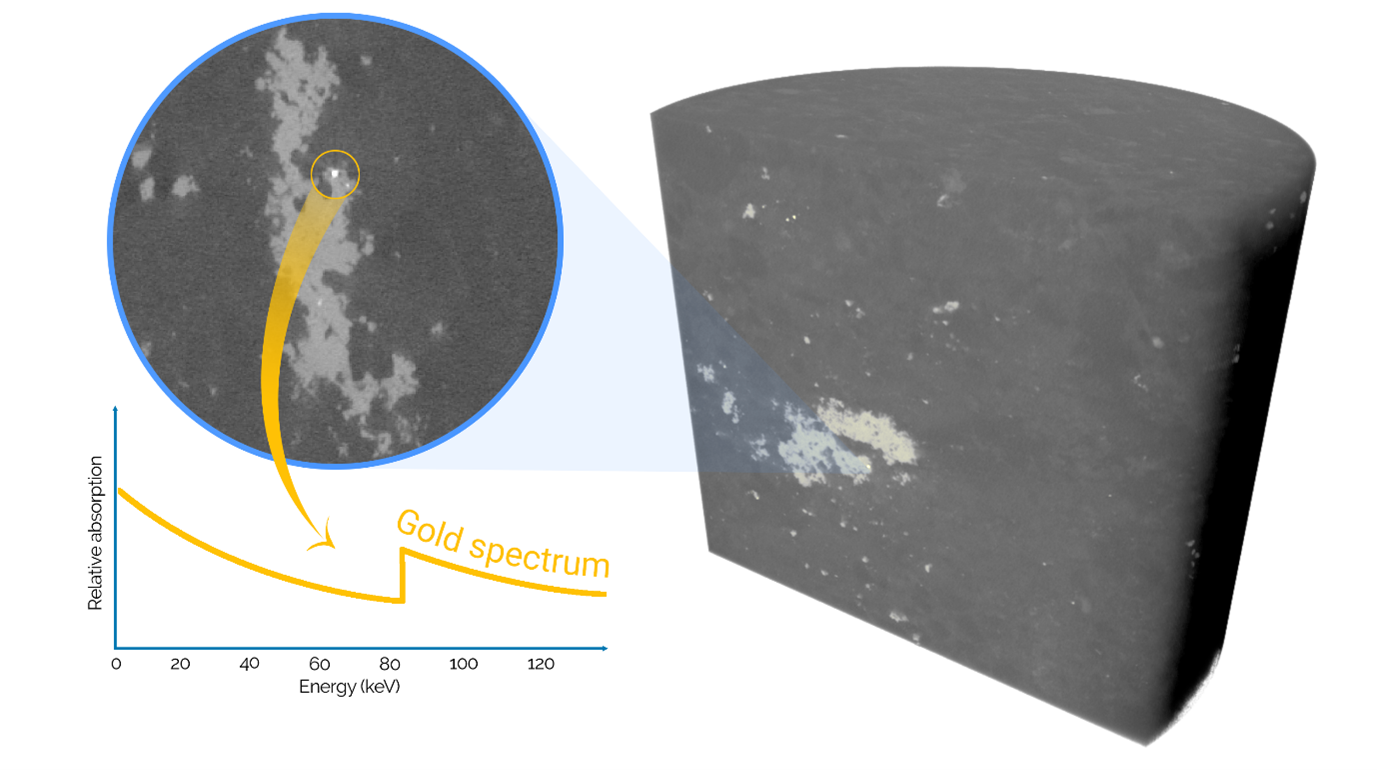 Having over a decade-long hands-on experience with micro-CT, scanned hundreds of samples and being amazed by new findings of their internal...

Micro-CT essentials: What about temporal resolution? 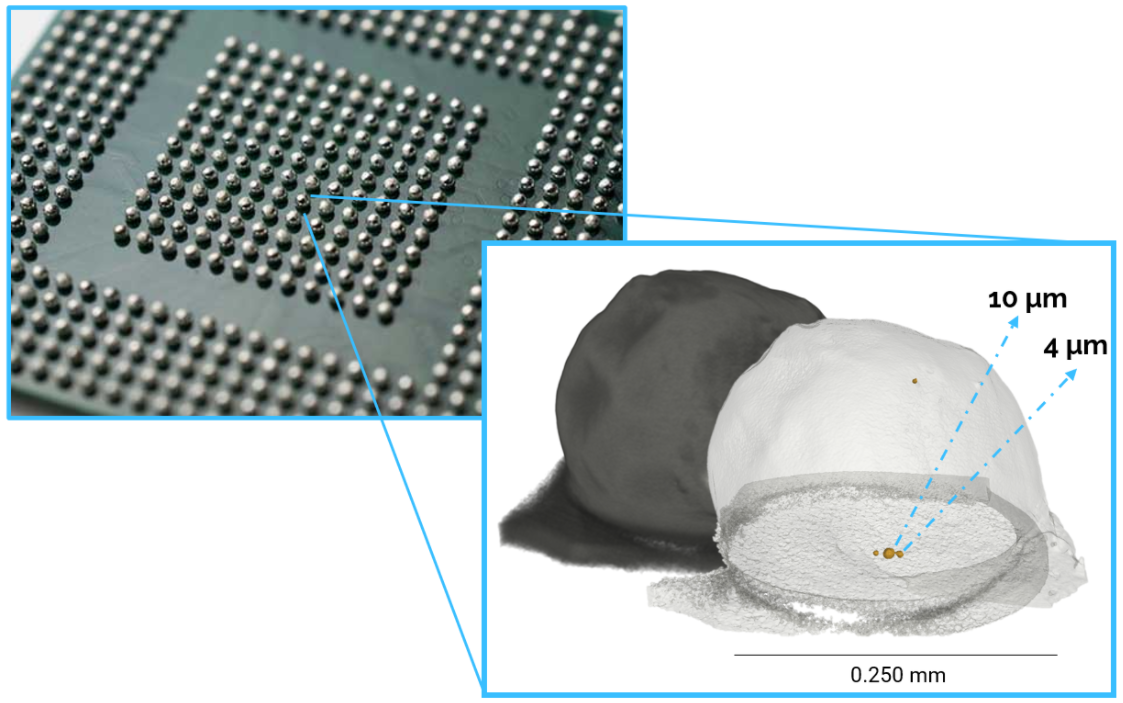 Micro-CT essentials: How do you determine spatial resolution?

In this blog series, dr. Wesley De Boever, micro-CT product marketing manager at TESCAN introduces the fundamental principles of micro-CT. And there...